Lapworth Architects have long been involved in the project to restore this famous landmark, and have championed careful restoration to bring it back to use for the local community.

In 2012, Lapworth Architects was instructed by BCG Lakes Limited to prepare a enabling development scheme to secure the future of Great Barr Hall and Park. Our task was to prepare a detailed scheme and formulate a professional team.  The team included Paul Drury of the Drury McPherson Partnership, David Geddes of Colliers International and Adrian Wikeley of Land Use Consultants.

By way of background Great Barr Hall was rebuilt as a country house c1777 by Joseph Scott, incorporating some minor elements of its predecessor, Netherhall, extant by the mid-17th century  Scott’s building was very much in the ‘Strawberry Hill Gothick’ style, with delicate detail ornamenting the symmetrical facades of a rectangular block eleven bays wide and three deep, with corner turrets.

An association with John Nash has been claimed but is not documented. In the 1840s, Scott’s son Edward Dolman Scott further altered and extended the building, reinforcing its fantastical Gothic character, still in stucco over brick.

By the late 1860s, he had added a completely contrasting brick and stone chapel (attributed, without documentary evidence, to Gilbert Scott) adjoining the main front. In 1911 the family sold the Hall as a hospital, which it remained until 1978. Subsequently it fell into complete dereliction, the condition in which the present owners acquired it.

The Hall was first listed in grade II* in 1971, placing it in the most important 7-8% of listed buildings in England. All that now survives is the shell of the main block with some external architectural detail; and internally, remnants of the roof and decorative plasterwork of the top-lit stair hall. The chapel remains in fragmentary form, seriously denuded by fire and theft.

Despite its damaged state, the building still had considerable heritage significance. Evidential value subsists in the remains of Netherhall, its 17th century precursor, which have some further potential to shed light on the form of documented earlier buildings.

The building is historically associated with Joseph Galton (tenant 1786-97) and the Lunar Society, although this is limited since all aspects of the building and its setting changed dramatically in the 1840s – 1860s. In terms of architectural value, the potential remains to recover the considerable significance of the design of the exterior as it was altered in the mid-19th century, primarily the north, west and (plainer) south elevations, the two former being the focus of the park; as well as the internal top-lit stair hall.

Importantly, however, the Hall is the essential focus of the pleasure grounds and park, included at grade II on the English Heritage Register of parks and gardens of historic interest.

The park has great inherent value in it provides the setting for Great Barr Hall, the two having evolved in parallel before becoming a well-established local landmark in the Walsall area.

Various potential uses for the Hall were considered by Lapworth Architects when drawing up the proposals for enabling development – a project that would help the restoration of a listed building or heritage asset – submitted to Walsall Council.

Neither the building nor the location makes it attractive as an office; specialist use as a data centre has been suggested but ruled out on the basis of insufficient broadband capacity (arguably not the best use of a late Georgian house).

Another proposal to use this striking building for self storage would generate little value to the community and would not secure a long term future for the building or the landscape.

The Hall was built as a single family house, so revision to such a use might be considered as the ideal conservation option. However, the market for a house of this scale in this location is very limited; comparables suggest an end value no more than about £1.5 – £2m, which would likely be less than the costs to refurbish the hall to a liveable standard.

More practical in the location would be conversion to smaller houses or apartments, retaining and restoring the stair hall, with a ‘mews’ development to the rear – similar to our project like at Haseley Manor, which combined restoring a manor house near Warwick with a selection of townhouses to fund the renovation.

BCG Lakes held discussions with a number of possible end users, including the Museum of World Religions, who expressed interest in using the Hall as a museum/ convention centre. However this option was not pursued as the long term strategy and funding stream were both unclear.

Following our recommendations, the proposals for the internal configuration of the Hall were modified, and its development split into two phases, first bringing the hall back into repair and use (which can just be achieved by the maximum amount of enabling development that the site can reasonably support) and a potential extension funded as a commercial investment.

A planning and Listed Building Application was submitted to Walsall Council for restoration and alterations to Great Barr Hall Grade II* Listed Building and Grade II Registered Park including: 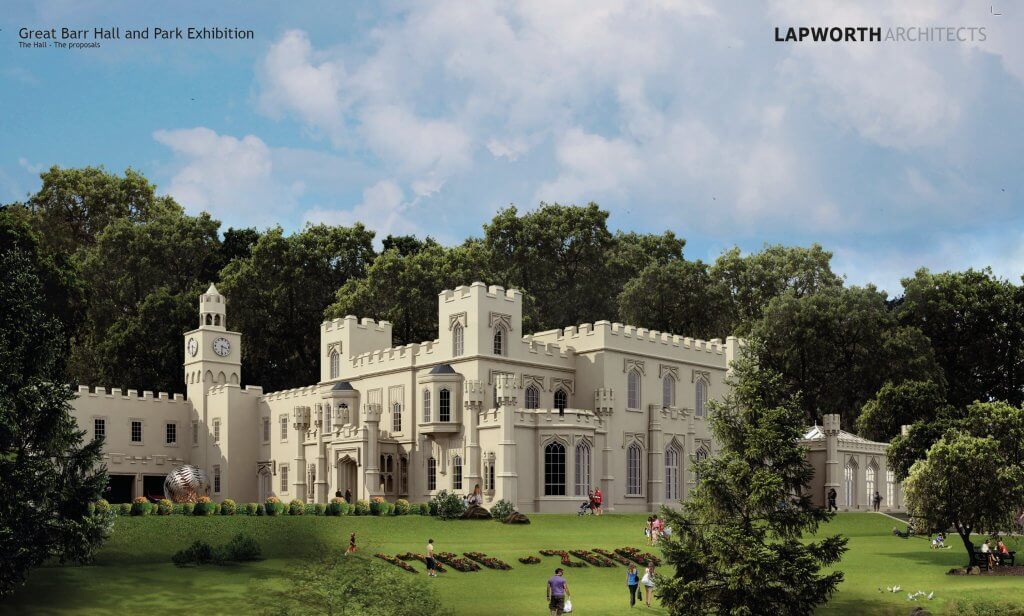 Unfortunately, this project hasn’t come to fruition, and Great Barr Hall has continued to deteriorate thanks to a lack of proactive involvement from various stakeholders. However, Lapworth Architects have worked on dozens of heritage and listed projects in the West Midlands, and we hope to be involved in a more ambitious project to bring this beautiful building back to life. Take a look at our Conservation and Listed Projects page to see more of the work that we’ve done.