Lapworth Architects were commissioned to design an extension to this unique hotel in the East Midlands, as well as draw up plans for housing and a nursery to finance the build.

A new home for the GFTU

Quorn Grange Hotel was originally built as a large Edwardian house, which was converted to a hotel in the mid twentieth century and has previously been extended to add further bedrooms and other facilities.

The hotel was bought by the General Federation of Trade Unions in 2010, who run Quorn Grange as a social enterprise and home for its educational and administration centre.

The hotel’s reputation has improved as the GFTU invested in new fittings, refurbishing the rooms and creating a gym space, and started to need extra space for the guests, students and educators that using the facilities.

The GTFU funds their educational programme with the revenue they get from the hotel, and so decided to consolidate their income by investing in Quorn Grange to offer more bedrooms for guests, purpose-built nursery facilities, an extension to the existing nursery and conversion into offices, as well as the construction of 9 mewshouses in a courtyard-style arrangement close to the hotel.

With its long waiting list, the success of the nursery meant that it needed to expand out of its current home. With a new purpose-built  building with five classrooms, the new nursery is much better suited to meeting its needs and growing demand. As the hotel extension and houses were more traditional, the nursery was designed in a sleek contemporary style that contrasted with the rest of the complex, which met with the planners’ approval. 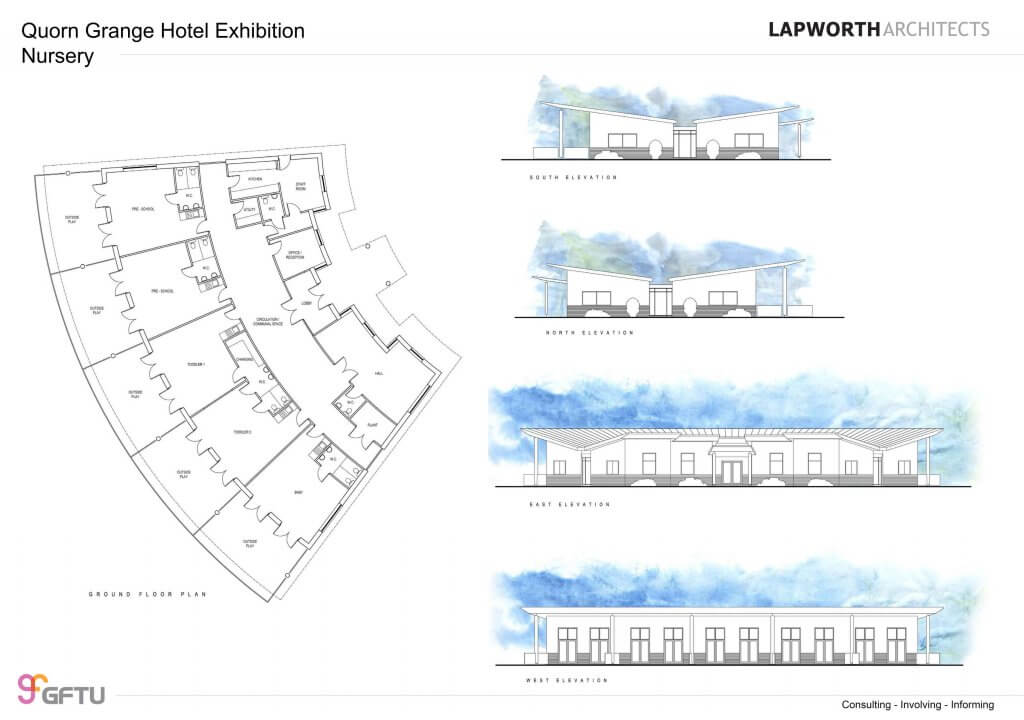 The existing nursery building was created by converting a former 1980’s house and no longer meet the needs of the growing classes. With a small extension, the building would be converted to offices, which would provide more social space in the current hotel building .

With the lodge demolished, and to provide housing to meet local demand and to further boost the GTFU’s revenue,  Lapworth Architects designed 9 new residential mews houses close to the hotel in a traditional style that matched the immediate surroundings of the hotel and the nearby housing.